New American Paintings Contributer, Arthur Peña, speaks with Eric Fischl on the occaision of his survey exhibition, If Art Could Talk, at the Dallas Contemporary.

Arthur Peña:    There are so many moves and nuances playing out on the surface of the paintings. The work has a constant restlessness in the how the paint is being pushed around.

Eric Fischl:       I don't know if you have that as well. I'm assuming you do, I think all painters do, which is that I’m always wondering what's enough. What does it take to make it feel alive, make it feel real? How much detail do I need? Do I stick to some strict formula? Do I deviate? Do I whatever? I thought the older I got, the better at the craft I got, the more that question would go away, but it gets worse. 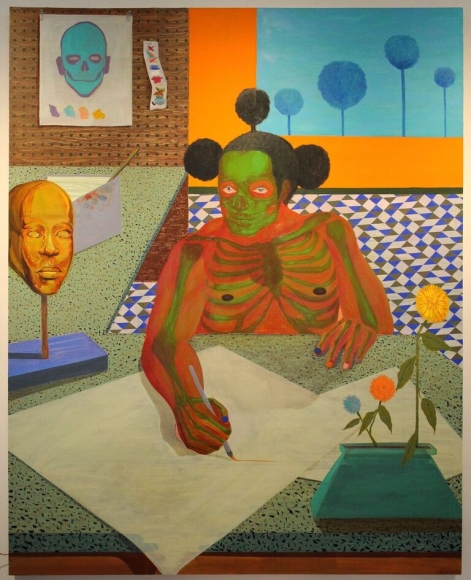 After a sleepy summer the art world is once again up and running full tilt. Among the hundreds of painting shows on view throughout the country this month are close to three-dozen solos by New American Paintings’ alumni. They range from shows by talented emerging artists such as Samantha Bittman at Andrew Rafacz in Chicago and Suzannah Sinclair in Boston to strong mid-career painters such as the phenomenal Sarah McEneaney at Tibor de Nagy in New York City and Emily Eveleth at Miller Yezerski Gallery in Boston. I want to give a special shout out to my buddy Eddie Martinez, whose show at the new Kohn Gallery space in Los Angeles confirms what many already knew: Eddie is one of the best natural painters of his generation.

There is a lot of good abstraction on view this month. For those in New York City, the fearless Chris Martin has his debut at Anton Kern Gallery and the much-hyped Norwegian artist Fredrik Vaerslev can be considered at Andrew Kreps Gallery. Also in New York, co-curator for the 2014 Whitney Biennial and juror for our upcoming Northeast issue, Michelle Grabner, has just opened a must-see show at James Cohan Gallery. In Los Angeles, don’t miss Sam Falls at Hannah Hoffman and Pia Fries at Christopher Grimes Gallery. If you are in the Bay Area, visit Jessica Silverman Gallery to see the work of Hugh Scott-Douglas, who, like an increasing number of emerging artists, is obsessed with process.

While abstraction continues to look good this season, representational painting has been making a comeback and it owns the month. Over the past two years, more and more young artists have been engaging with imagery, in particular the figure. There are the aforementioned exhibitions by Sarah McEneaney and Suzannah Sinclair to consider. In New York City, emerging artist Gina Beavers continues to push impasto to the limits in her new group of paintings at Clifton Benevento and the virtuosic Angela Dufresne has a new suite of paintings with figure in landscape at Monya Rowe Gallery. Other shows of note around the country include: Storm Tharp at PDX in Portland, OR; Angela Fraleigh at Inman Gallery in Houston; Whitney Bedford at Carrie Secrist in Chicago; and the group show “Bedtime Stories” at Alpha Gallery in Boston.

In a quiet, but extraordinary exhibition at Matthew Marks Gallery in New York, LA-based artist Paul Sietsema renders carefully selected imagery with such technical dexterity that they almost revert to real objects. Sietsema is not interested in trompe-l’oeil for the sake of showing off; at the end of the day, his paintings and works on paper are a highly considered critique of the production of cultural objects and the roles that they play as they circulate. Taken as a whole, this exhibition represents the various aspects of how a painting can function. - Steven Zevitas, Publisher

Listed under: Must-See
Tagged as: Must See, painting
Read more

Back in December, I wrote an article in which I suggested that, after a number of years in which abstraction has been the dominant mode of painting in the “contemporary art world,” we might start to see an upswing in image-based painting. It is not exactly a Delphic prophecy given the way in which today’s market driven art world is constantly craving the next best thing, and, I might add, in ever more compressed cycle times. In conducting my monthly survey of commercial gallery shows this month I was struck by the amount of representational work on view, and even more so by the “academic” rigor much of it evinces. So what am I talking about? Have a look… – Steven Zevitas, Publisher

The artist Julie Mehretu has often commented that “trying to figure out who I am and my work is trying to understand systems.” In a new body of work on view at Marian Goodman Gallery in New York, it is equally her desire to understand systems and their disintegration that becomes the subject of her art.

Summer is a time when many galleries choose to mount group shows, and beginning in July, dozens of such shows will open throughout the country. This month, however, solo exhibitions dominate the commercial gallery landscape…are there are a lot of good ones in the mix. Among them, are shows by more than two dozen New American Paintings alumi. I am particularly excited about John Zurier at Peter Blum Gallery, Garth Weiser at Casey Kaplan, and Ann Toebbe at Monya Rowe Gallery, all in New York City. And if you live in Chicago, be sure to catch a two-person show featuring 2012 MFA Annual artists Samantha Bittman and Gabriel Pionkowski that opens at Thomas Robertello Gallery on June 14th.

It is, once again, a very strong month for New American Paintings’ alumni with close to thirty solo exhibitions on view around the country. Some of these artists are now well established, such as Amy Cutler, others are early in their careers, such as Ellen Lesperance, who is currently exhibiting her intricate works on paper and objects at Ambach & Rice in Los Angeles.

The heat has been turned way up on the East Coast, which is all the more reason to duck into a few galleries as you trudge through the city. As is typical for the summer months, a lot of galleries have mounted ambitious group exhibitions, many of which focus on painting.