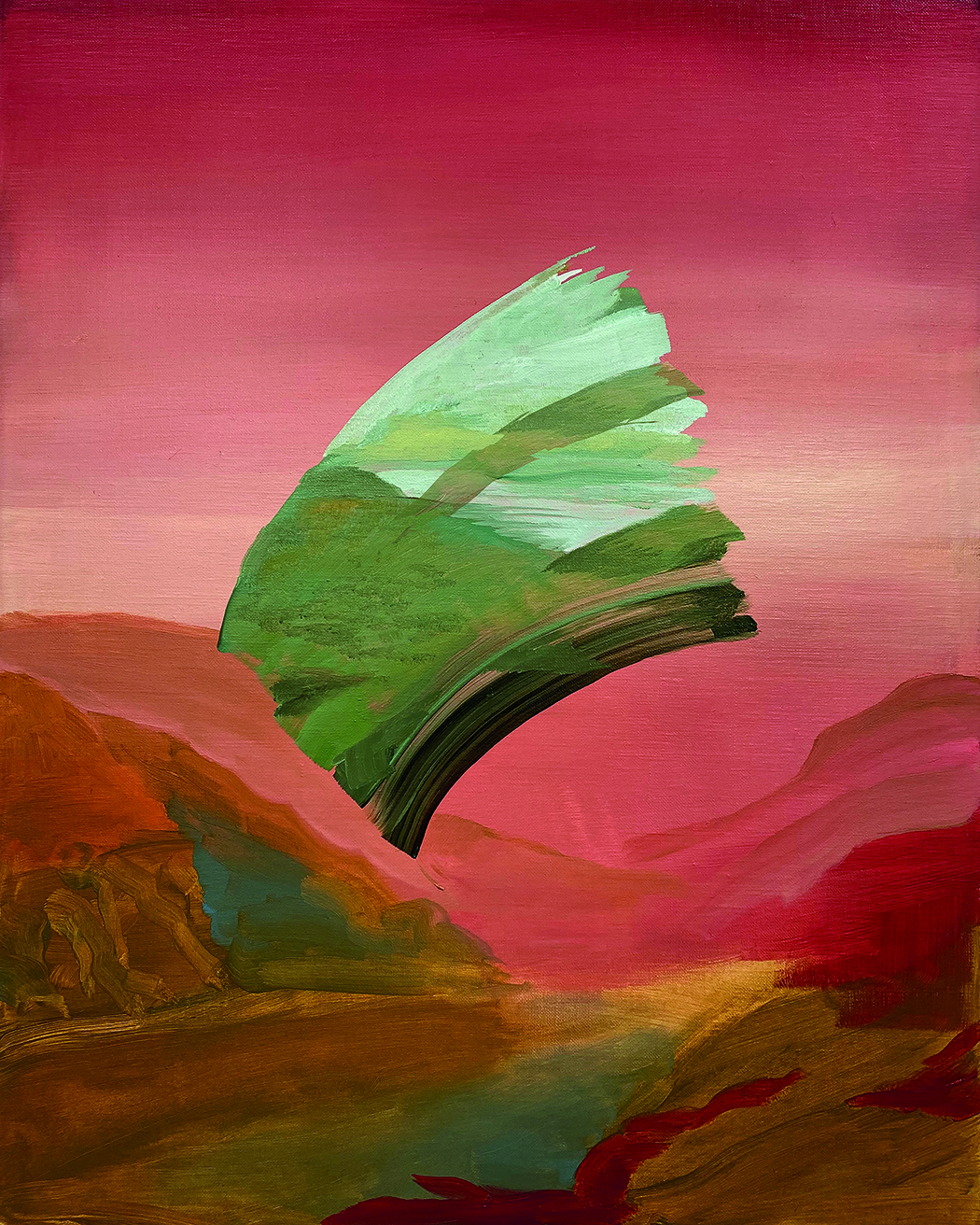 The painting is Kimberly Brooks’s Red Canyon (2021), part of a new body of work in which the Los Angeles painter breaks new ground while expanding on elements of her other, more pictorial work. Brooks has been flirting with abstraction for the past decade, but finally took the plunge when asked to design a cover for her book, The New Oil Painting (published in May by Chronicle Books). Her original plan to use a detail from an existing work was abandoned in favor of an attempt to capture the essence of painting in a more direct form. Bluewave (2020), the eventual choice, features an agglomeration of variegated strokes of blue hovering above a smoother gradation of the same color, cloudlike, but ultimately amorphous and unnamed. The work suggests both raw improvisation and planned experiment, a strategic mix of cool rationality and deskilled, counterintuitive gesture that evokes Gerhard Richter’s early painting Table (1962) in which the artist obscures a neat rendering of the titular piece with a chaotic swirl of gray.

Other works in Brooks’s online exhibition “New Abstractions,” presented this summer by Artsy for Los Angeles gallery Zevitas Marcus, also hinge on the blending and juxtaposition of stylized environmental settings and purely gestural elements. In Storm (2021), for example, broad strokes of green and yellow arc around and over a loosely configured environment not dissimilar to Red Canyon’s, while Midnight (2021) is a more ambiguous and complex arrangement of dabbed and brushed paint in a range of hues that vibrate against one another. Hwy 101 (2021) again takes landscape as its starting point, turning the view from the window of a speeding car into a blurred sweep of distant trees and sky. (Richter comes to mind again here, in this case for his use of a diffuser brush to soften his images and thereby visualize their technical and conceptual relationship with a photographic source.) 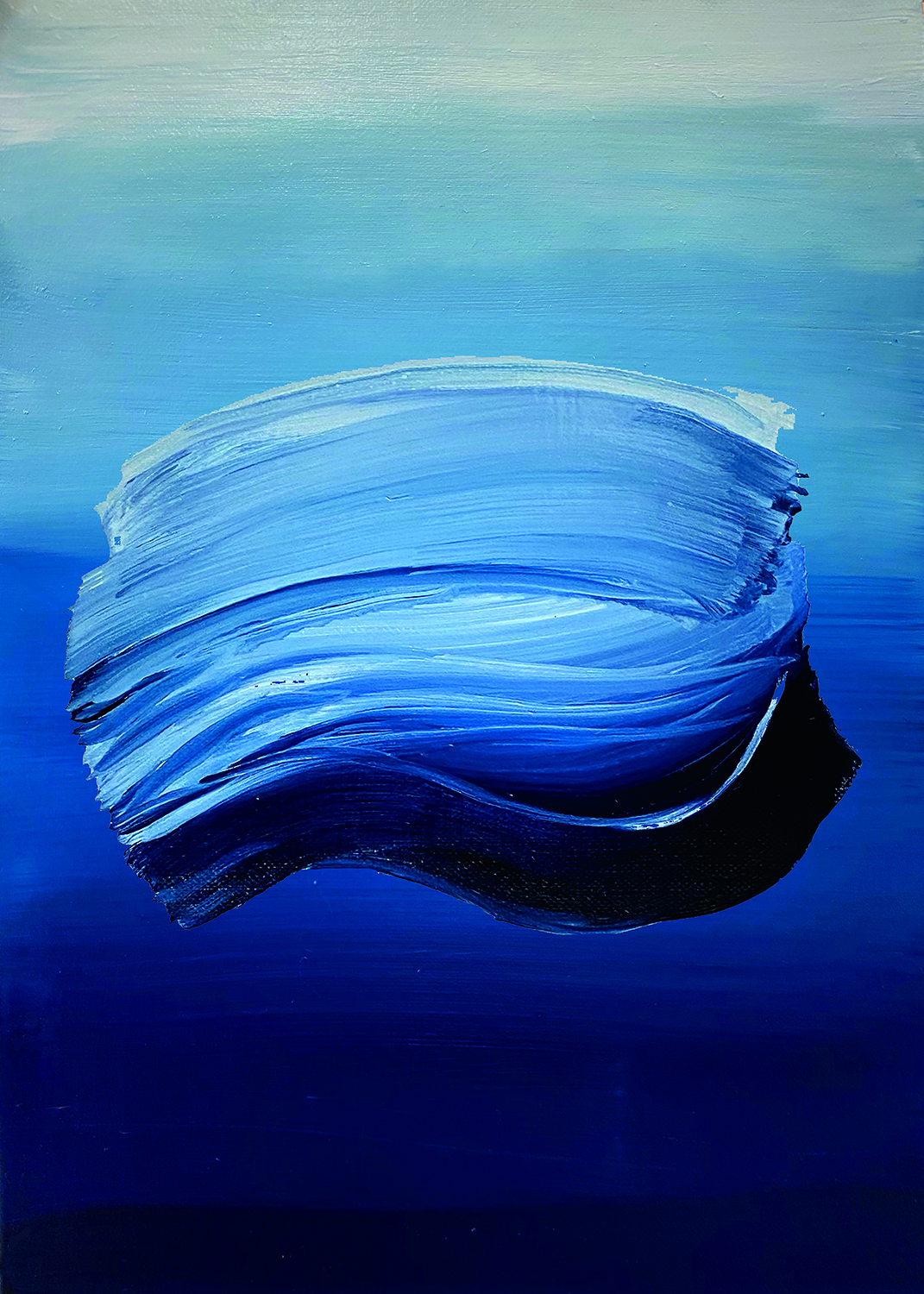 The variety of abstraction that Brooks’s new works exemplify is amongst the most challenging of all; superficially casual, it is fiendishly difficult not to over– or undercook. A useful point of reference in considering this difficulty is British painter Howard Hodgkin (1932–2007), whose compositions are frequently centered on a small number of broad, modulated brushstrokes, yet still manage to achieve a coruscating visual and emotional intensity. Hodgkin’s late work in particular focuses on the intangibility of thoughts, feelings, and fleeting private moments, using layered color to evoke specific but unstated memories. Brooks’s paintings share something of this intimate intensity; there’s an emotional weight to them that gives the lie to their light touch and modest scale. As in her previous work, the brushwork is never too dense and detail is kept in check. Yet far from emptying the work of content, this material restraint allows more space for psychological nuance. 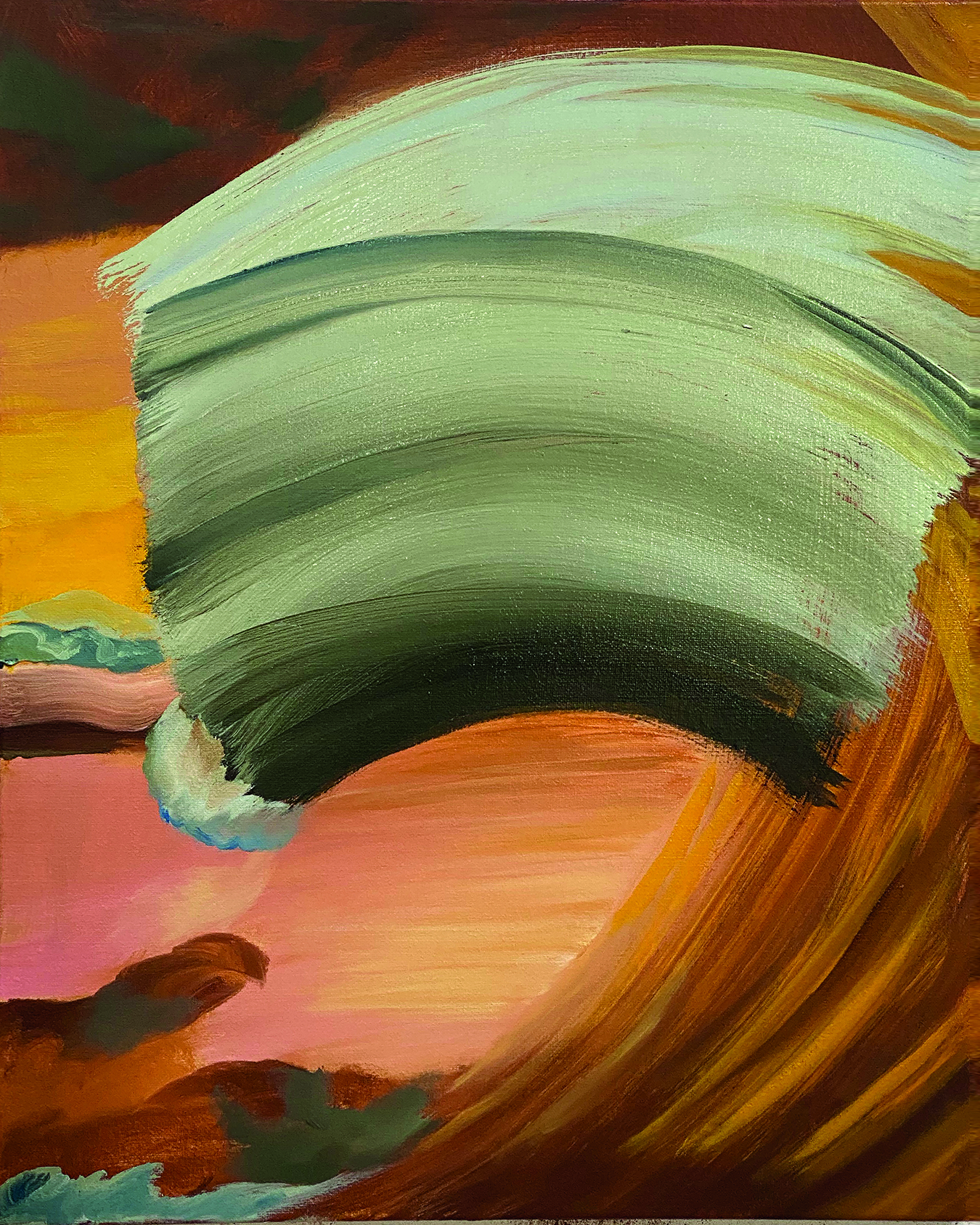 In The New Oil Painting, Brooks goes deep into her medium in a different way, outlining and illuminating the fundamentals of painting as a craft. She emphasizes in particular the replacement of harmful solvents with healthier and more environmentally friendly but equally effective alternatives, rooting her advice in a mix of hard science and personal anecdote—Brooks herself suffered bad reactions to solvents in the past—while an engaging style makes it accessible to the beginner. However, as the author explains, The New Oil Painting is not simply a technical manual, it is about “all the things we use to make the magic happen.” Her core subject is the artist’s relationship with materials; she looks at how they were first adopted and which are the most useful today, countering in the process the myth that painting requires a vast array of specialist products.

Throughout her artistic evolution, Brooks has wielded this technical knowledge and experience to pursue an almost hallucinatory disassociation from real time and readily identifiable place. The landscapes and interiors that dominate her work prior to its shift into abstraction, and which continue to exercise a clear influence over it today, take memory—its unreliability, its capacity to transport us beyond the lived moment—as their primary subject. Even when the figures depicted are those of her own family, or when the locations belong to shared narratives, they retain an air of fantasy. There are thematic and formal through lines too; a love for the decorative and the architectural, for nature both wild and manicured, and for images within images, frames within frames.

In her new paintings, Brooks continues to pursue these strategies and atmospheres, pushing beyond her earlier emphasis on the social, the familial, and the historical to arrive at a destination that is outwardly more enigmatic, but which succeeds in reinvesting the substance of paint with an uncanny beauty and quiet power. Where her earlier works often moved through grand interiors peopled by glamorous individuals, sometimes reflecting on wealth and influence, her newest explore a destination at one remove from the noise of human competition. Here, all ideas of status fall away, leaving only color, shape, and onward, outward motion. 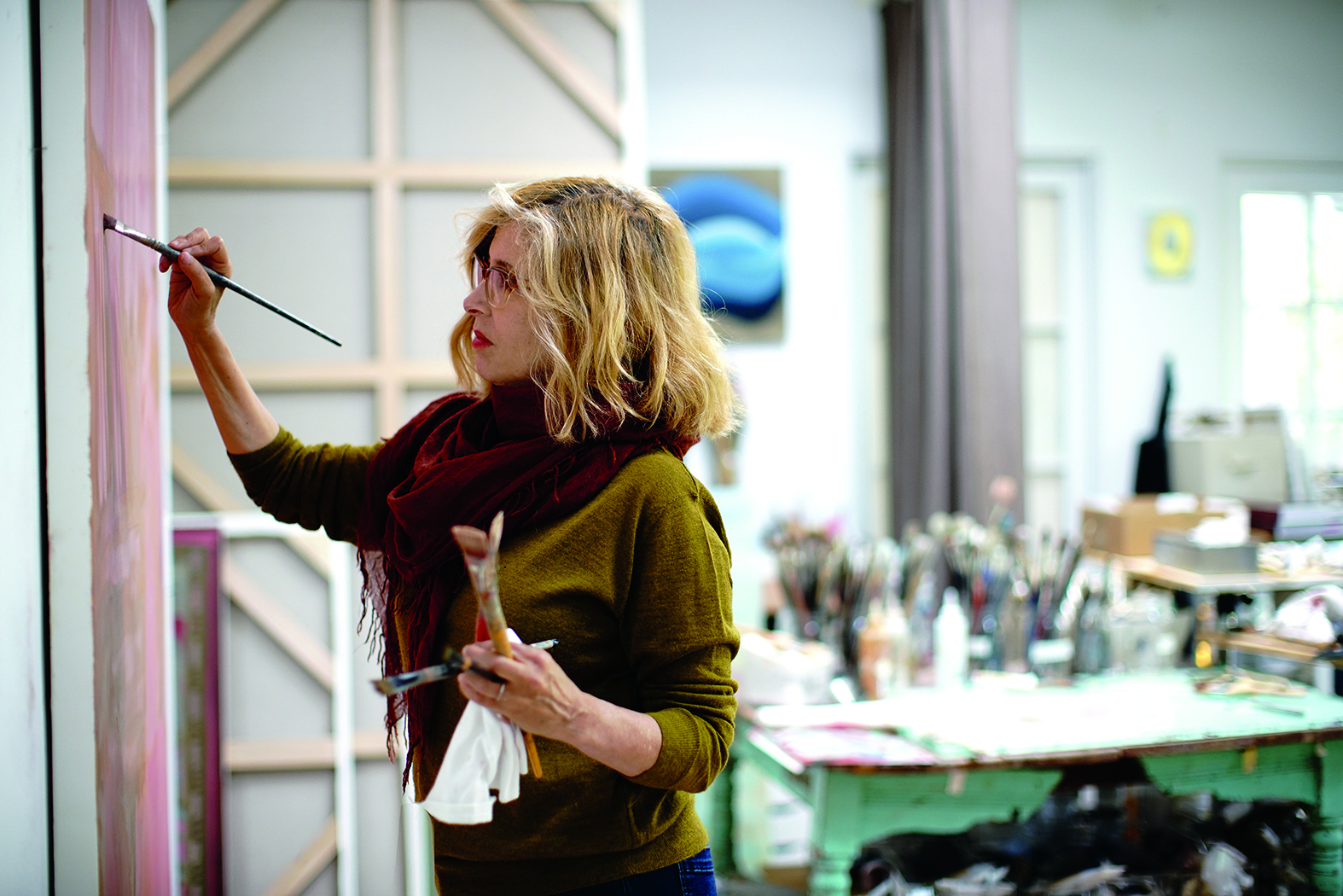