Armory Week is a beast. After experiencing a non-stop visual bombardment of incredible artworks from around the world for three solid days, my eyes needed a rest. But once the art hangover subsided, I was surprised by the clarity I felt surrounding some of my favorite pieces.  A few were immediate hits, while others were slow burns I found myself mulling over long after the fairs ended. That being said, I wanted to share with you some of the artists who captured my attention, brought something new to the table, and prompted my weary eyes to un-glaze during this year's Armory Week. – Elizabeth Devlin, Boston Contributor

Yesterday I posted pics from the Armory Show, and I hope you enjoyed them. Today I bring you shots from the Volta Show, one of my favorite fairs around. So many great artists, but these are some of my favorites...Take a look, maybe you'll see something you like. Tomorrow...Whitney Biennial. - Andrew Katz, Associate Publisher 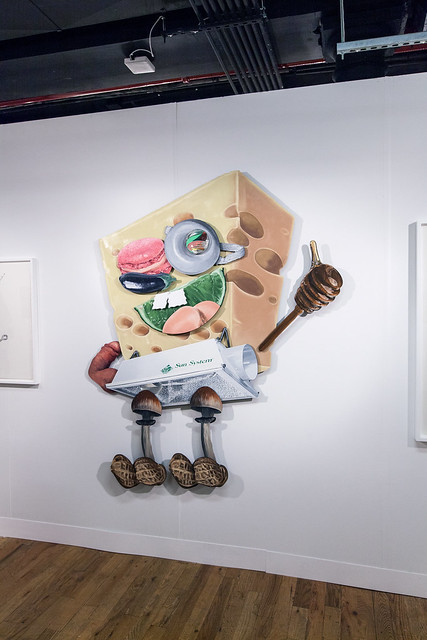 One of the privileges of working for a contemporary art fair whose focus is solo-artist projects is the opportunity to see a range of works by artists from all over, be they from Bushwick or Berlin. This could mean their newest series or a multiyear survey of their oeuvre, sort of like a mini retrospective staged within their exhibiting gallery's booth.

Highlights from the 2013 VOLTA Show

I hope you liked the pics I posted yesterday from the Armory Show. Today I'm sharing photos from The Volta Show. It's hard to choose which images to post, but I chose the following to give you a feel for the fair (in case you couldn't make it) and to feature the stand-out booths and works. The venue was great...A bit cramped at times, especially on the first floor, but the building was beautiful and the location was awesome. Already looking forward to next year! - Andrew Katz, Associate Publisher

Next week we're headed back to NYC for VOLTA and The Armory Show. Both fairs are open to the public starting on Thursday, March 7th, and open through Sunday, March 10th. I'm anxious to see how the new venue for VOLTA NY works out, although the raw space looks amazing (pictured below). I'll be taking plenty of photos so check back here on the 11th. I'll do my best to put you in the heart of the action in case you can't make it. - Andrew Katz, Associate Publisher

We just found out that one of our favorite fairs is moving to SOHO! From the Volta Show NY press release:

"VOLTA NY, taking place from Thursday, March 7, through Sunday, March 10, is thrilled to announce its NEW LOCATION for 2013: 82MERCER in SoHo, New York.

The Mercer Street building's 50,000 square foot exhibition space, comprising two floors and daylight loft-like spaces, is nestled in a groovy corner of SoHo and will provide a handsome platform for VOLTA NY's strictly solo-project format, including a broad international roster as well as plenty of local representation."

Last weekend was fun, with a trip to NYC for the art fairs. That led to quite a few posts summarizing our experiences there. We also had some great interviews throughout the week given to us by contributors Ellen C. Caldwell and Josh Reames. If you missed any of the posts, check them out below!

It was great being in the city for the fairs this past weekend. Between the three NAP staffers on the trip, and our two guest photo bloggers (Lee Gainer and Joshua Field), we saw a lot of art.

Well we are back from New York and we are beat! If you call the office today, go easy on Alexa, it was a late night traveling. We still have tons of our own photographs to go through from the fair, which should be posted tomorrow. In the meantime, we have a final round of images submitted by our guest photo blogger, Lee Gainer. Last time she checked in, Gainer had sent images from Armory and Scope. Now she shares her favorite pieces from the VOLTA fair (one of our favorites!). See her pictures after the jump, and be sure to come back tomorrow for our staff favorites from Armory, Volta, and Independent.

Our guest blogger Joshua Field was busy this weekend. In addition to the Armory and Scope (click for previous post), he made it to Fountain, Volta, and the Independent. After the jump, check out some works he was admiring at the remaining three fairs. Be sure to keep checking in over the next few days to see more from our other guest blogger, Lee Gainer, and our own New American Paintings staff.