Staci Boris has been Chief Curator at Elmhurst Art Museum since 2012. Before coming to EAM, Staci served as Senior Curator at Chicago’s Spertus Museum from 2004 to 2009, and was responsible for shaping and overseeing the museum’s exhibition program in their new building. Staci also served as a curator at Chicago’s Museum of Contemporary Art, where she worked for 12 years and organized a number of noteworthy exhibitions, including the first U.S. retrospective of William Kentridge, the first survey of John Currin, and the first solo museum show of Sarah Sze. Staci has an M.A. in Art History and Museum Studies from Boston University, and a B.A. in Art History from the University of Wisconsin-Madison. She lives in Chicago with her husband and two children. 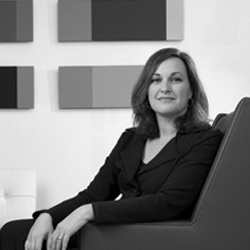