Kelly Shindler has worked in the field of contemporary art exhibition and programming for over ten years. She joined the Contemporary Art Museum St. Louis (CAM) in 2011. As Associate Curator, she has organized solo exhibitions with Lari Pittman, Anthony McCall, Rosa Barba, Mika Taanila, Ed Ruscha, Geta Brătescu, Takeshi Murata, Ulla von Brandenburg, Kevin Jerome Everson, and Josh Faught, among others. Shindler is the curator of the major mid-career survey, Dear Nemesis, Nicole Eisenman 1993–2013, which traveled from CAM to the Institute of Contemporary Art Philadelphia (2014) and the Museum of Contemporary Art San Diego (2015). Prior to joining CAM, Shindler was an independent curator, organizing exhibitions such as Chicago-Scope: The Films of Tom Palazzolo 1967–1976 at The Art Institute of Chicago, and others for art spaces and festivals worldwide. From 2003–2011, Shindler worked at Art21, producer of the PBS documentary series Art:21—Art in the Twenty-First Century. She holds Master’s degrees in both Modern Art History, Theory, and Criticism and Arts Administration and Policy from the School of the Art Institute of Chicago, as well as a B.A. in English Literature from the University of North Carolina at Chapel Hill. 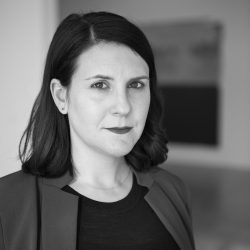