Joseph C. Thompson has spearheaded the creation of MASS MoCA - the largest center for contemporary and performing arts in the United States - from its beginnings in 1987 to its realization in 1999. Thompson began lobbying for the formation of the center shortly after the project was proposed, and was appointed founding director of MASS MoCA when initial plans were approved by the Massachusetts legislature in 1988. Thompson expanded the institution from its initial mission as a venue for the display of contemporary visual works, to a center that encompasses and erases the traditional line between the visual and performing arts. His vision of MASS MoCA as an open laboratory for both artists and visitors to explore contemporary art has led to the creation of an institution unparalleled in this country. In the eleven years he has served as Director, Thompson has overseen the development of the architectural program for the 13-acre campus of 19th-century factory buildings; articulated the institution's far-ranging program; and built the center's staff, board, and governing structure. Simultaneously, he has played a critical role in raising both the public and private funds that have enabled MASS MoCA to become a reality. Mr. Thompson has sparked and nurtured many of the projects developed as part of MASS MoCA's evolution and site-testing, including Desire, the first solo exhibition of the visual art of David Byrne; the Clocktower Project, a permanent sound art installation by Christina Kubisch; and EarMarks, an exhibition of seven site-specific sound art installations in Northern Berkshire County. Thompson's nearly twenty-year career in the arts spans museums and academia. Beginning in 1982, he served for three years as preparator and exhibitions designer at the Williams College Museum of Art, and 1984 was awarded a residency at the Smithsonian Institution in Washington, DC as the James Webb Fellow for excellence in the management of cultural institutions. From 1988 - 90, he held the post of lecturer in contemporary art at Williams College and the University of Pennsylvania. A 1981 graduate of Williams College, Thompson received an MA in art history in 1986 from the University of Pennsylvania, where he was named an Annenberg Fellow. He earned an MBA from the Wharton School of Business in 1987, along with the Morganthau Fellowship in recognition of his work in public policy and management. 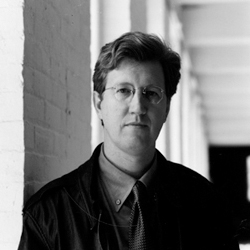