Ivan Karp (June 4, 1926 - June 28, 2012) was an art dealer, author, and American gallerist, instrumental in the emergence of pop art in the 1960s. Karp was born in the Bronx but grew up in Brooklyn. In the early 1960s, while working at the Leo Castelli Gallery he helped sell the works of, bestow fame upon, popularize and market the initial generation of Pop artists, including Andy Warhol, Jasper Johns, Roy Lichtenstein, James Rosenquist and Robert Rauschenberg. After leaving the Leo Castelli gallery in 1969 where he worked as gallery co-director for nearly 10 years he opened his own gallery called OK Harris in SoHo (which at the time was the newest gallery district in New York City). Karp died at the age of 86, in Charlotteville, New York. 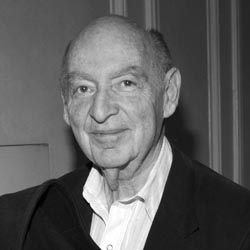