Prior to joining the RISD, Molon was the Chief Curator at the Contemporary Art Museum St. Louis. Prior to that, he was curator at the Museum of Contemporary Art, Chicago, where he curated major thematic survey exhibitions with a broad international and historical scope such as Production Site: The Artist’s Studio Inside-Out (2010) where the exhibition addressed the pivotal role of the studio in artists’ practice; and Sympathy for the Devil: Art and Rock and Roll since 1967 (2007). This monumental exhibition was the most serious and comprehensive look at the intimate and inspired relationship between the visual arts and rock-and roll culture to date. He also organized solo exhibitions of such significant contemporary artists such as Liam Gillick (2009), Wolfgang Tillmans (2006), Paul Pfeiffer (2003) coorganized with MIT List Visual Arts Center, Gillian Wearing (2002), and Sharon Lockhart (2001), while coordinating numerous traveling exhibitions including Take your time: Olafur Eliasson, Karen Kilimnik, Kai Althoff: Kai Kein Respekt (Kai No Respect) and Charles Ray. Molon holds a Master of Arts in Art History and Criticism from the State University of New York at Stony Brook, as well as a Bachelor of Arts in History of Art and Architecture from the University of Illinois at Chicago. (Photo by Walead Beshty) 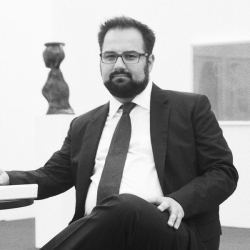