Barbara O'Brien joined the Kemper as curator in 2009 after serving as assistant professor of art at Simmons College in Boston, where she was also director of the college’s Trustman Art Gallery and head of its arts administration program. From 2003-06 she was editor-in-chief of Art New England magazine and earlier was director of the gallery and visiting artist program at Montserrat College of Art in Beverly, Mass. At the Kemper, O’Brien organized the just-opened retrospective of New York and Maine-based painter Lois Dodd, and the ongoing “Eric Fertman: Here’s Your Hat, What’s Your Hurry” exhibit at Kemper at the Crossroads. Other exhibits include “Wilbur Niewald: The Studio Portrait,” “Jeanne Quinn: Ceramic In(ter)ventions,” and “Ana Maria Hernando: When the Women Sing.” She also has developed the museum’s traveling exhibition program. A native of Bonner Springs, Kan., O’Brien earned a master’s degree in photography from the Rhode Island School of Design, and holds bachelor’s degrees in women’s studies and journalism from the University of Kansas. 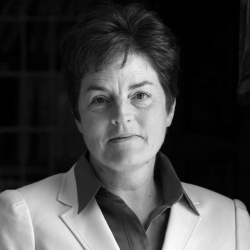