Zach Bruder’s metaphorical approach to painting results in inventive compositions in which both pictorial and illusionistic space play roles. Humorous and allegorical, his paintings involve flora, architecture, and anthropomorphism. Bruder’s canvases revive and repurpose familiar motifs from classical and vernacular mythology using source material from his extensive image archive amassed over the past decade. His paintings speak of today’s world, conflating divergent pictorial influences from advertisements, caricatures, cartoons, photos, and paintings from this century and the last, flaunting the artist’s ability to render different spatial dimensions and finding a humorous irony and cohesive unity in their discordance. Addressing mythologies both cultural and personal, Bruder’s paintings offer multiple interpretations of social and religious narratives and urgent responses to the societal and political moment in which they were produced. Far from cynical, however, his work is not about denouncing hypocrisies but rather centered on capturing everyday paradoxes. Faced with one of Bruder’s canvases, the viewer takes an active role, deciphering the intertextuality between the literary, historical, and folkloric references he often cites simultaneously. 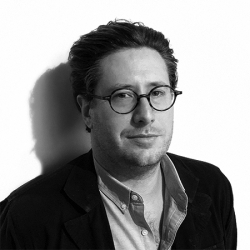