After researching and participating in the adult entertainment industry during college, Yun explored the contrasting perspectives concerning the branding of its participants by the public and who these women actually were by becoming one of ìthem.î Some of these women, like herself, were driven to this point of desperation. From one perspective these women were mothers, college students, marketing consultants, and gym teachers. From another perspective they were sex workers, outcasts, drug addicts, and women of ill repute. Obviously, Yun had a difficult time labeling herself, finally settling on the idea that she was a flower; that all women are flowers. Ultimately, her work evolves around the elements of feminism, identity, and social commentary, often presented within the context of paradox, mockery, and opposition. Flowers therefore came to symbolize the essence of the woman. From afar one sees the plant silhouettes of these fleshy colored flowers, beautiful and innocent. However, upon closer inspection, the leaves and petals are actually female body parts that evolved from a collage of imagery found in pornography magazines. While pornography is a classic example of womenís objectification and exploitation, Yun uses the imagery as a form of empowerment, thereby celebrating the spirit of all women. The work has grown to symbolize triumph from difficult times, with a focus on healing and enthusiasm for the future. 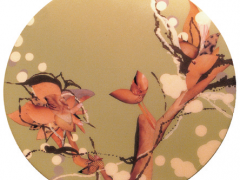 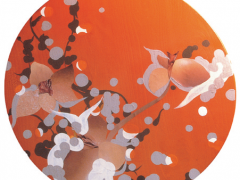 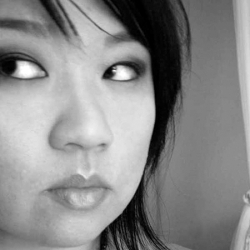