In these large scale narrative figure paintings set in invented landscapes, I have sought a dynamic rather than a formulaic balance between the ideal and the real. The narratives are drawn from multiple myths, but the figures are portraits of specific individuals who are well known to me rather than idealized types. This has given the narratives an added "charge" and has served to ground the subject matter in the here and now. In exploring multiple influences, the imagery in my paintings has become complex both in composition and in narrative structure with ideas drawn from sources as diverse as Greek, Roman and Etruscan mythology, Christian iconography, Jewish mysticism and alchemy. The concept of Jungian archetypes has also influenced the direction of my paintings to incorporate multiple personae, twins and doppelgangers. Most recently, my paintings have included references to alchemical charts concerning the four humors of personality (melancholic, sanguine, choleric and phlegmatic) and to rebis figures, androgynous beings who symbolize the perfect union between divine polarities. My intention is to move beyond either portraiture or a specific story line into new realms of meaning. 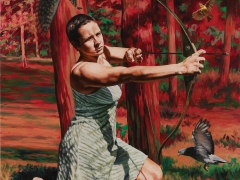 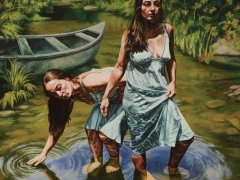 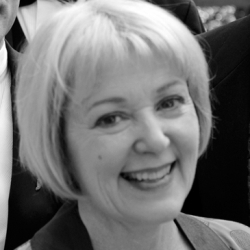