In the fall of 2019, I had the privilege of living and working in the heart of Tokyo. With time to explore and create new work, I made paintings based on encounters, interactions, and observations. This began a journey I hoped might capture the freshness of this endeavor in the form of responsive imagery or documentation for future development. Daily, I ran the hilly terrain of Minato-ku, sometimes finding my way back to the studio, often getting lost. Encountering the city in this manner led to unexpected visual discoveries. I looked forward to this perceptual investigation. Pictures appeared somewhere up in a high window, on a tiny street, or in a favorite grocery. Acting neither as voyeur nor literal translator, I saw my motif more clearly each day. Appreciation of the nuance and complexity of the Japanese sensibility was, and remains, gift received as treasure, sans expectations. When I returned to the US, COVID was a contagion cast upon the world. In my Hyde Park, Chicago, studio, I continue the work started in Japan. 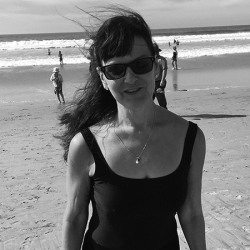