I’m interested in our interaction with and dependence on land, and on the cadastral systems that sectionalize and define our conception of it. My current work is an investigation of the Public Land Survey System (PLSS), which imposed a survey grid across the vast majority of the land west of the Mississippi. Emanating from initial point markers scattered across the States, land is divided into grids of six-mile square townships. Each township is further divided into thirty-six one-mile square sections. The sections are divided into aliquot parts as determined by regulation and local conditions. The grid was initially an invisible human construct, rational in concept, arbitrary and imperfect in application. Because of the length of time of its existence and the rigidity of its makeup, the land has slowly been shaped to the geometry of the grid. The land is not only contained but becomes a tabula rasa to be reshaped and determined by those who claim the right to contain it. My paintings attempt to explore the visual results of that reinvention. 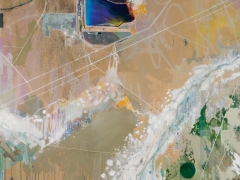 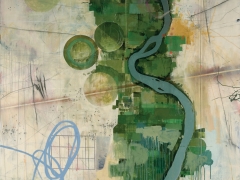 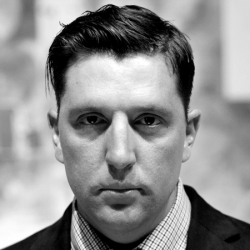