Order-anarchy
Utopia-dystopia
Hubris-humility It is in the borderland opening between definitions that these paintings reside, a place much like the nether-space of Wilderness. Our culture's ambivalence about the Wild is expressed thru either a yearning for a nostalgic, lost nature-or through the inverse, by descending into a toxic environment of greeds bashing into one another in an absurd simulation of "survival of the fittest." Because battles between intellectual imperiousness and audacious certainty have replaced the Faith-based wars of old, and competitions between scientific pride and conspiratorial theories of Everything have supplanted spiritual mystery-the paintings thus attempt to call a truce, and embrace untamed puzzlement. Our blundering desire to domesticate Wilderness-superimposing "forestry" onto the woods, "managing" the flood of feral rivers into rip-rapped waterways-is repeated in our political misadventures, as we attempt to redirect cultural power around the world, with US military bases becoming the dams, and the viral creep of global-capitalism mimicking the mono-culturization of biodiversity. The paintings question this hubristic folly not only thru subject matter, but also by redirecting the similar conceit of the creative hand-reeducating it into something more subtle, connected to something simpler than its calloused self. 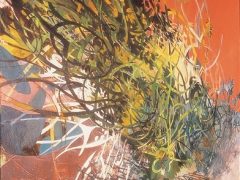 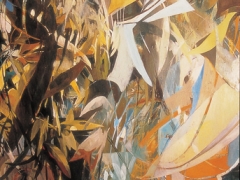 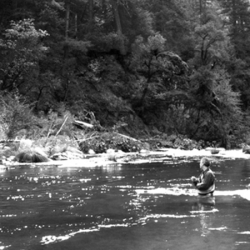