As described in the Japanese expression Wayo Secchu, meaning “a mixture of Japan and the West”, the modern Japan is a harmonious blend of Japanese traditions and cultures from the West. In order to express this facet, I combined the Japanese art with the Western counterpart. I selected the Kojiki as the theme. I wanted to express the themes from the most ancient book of Japan in the way European artists depicted stories from the Bible. While I take a theme from the Kojiki, I project the modern society upon the ancient story depicted in my art. Second, the distance to view art differs in Japan and in the West. Western paintings are generally created under the assumption they will be viewed from a certain distance. Conversely, many Japanese artworks are created with the assumption that people will take them in their hands. To emphasize this, I use camouflage, which is effective when seen from the distance, but I also paint minute details, which cannot be seen without coming close to the painting. 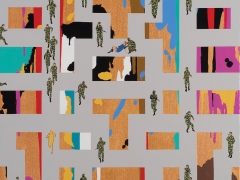 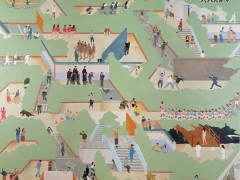 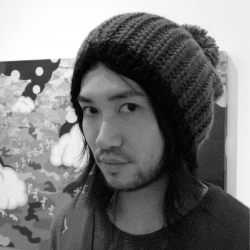