Each of my paintings peers into my personal journey, juggling the ambiguous roles of a twenty-first-century mother and artist. There is always the tug between needing to be at home spending time with my children and being in my studio working. This duality is a reality men are not traditionally challenged with. Asked to simultaneously serve as yin and yang, women are embroiled in long-held expectations that they will be nurturing and vulnerable within the expansive space of their inherent power, strength, and independence.

Beginning with sculptural formations I observe in furniture, often discarded and haphazardly tossed on the streets, I move from the object to the canvas and anthropomorphize these abstract shapes into representations of the body. My figures are rendered genderless and loosely repetitive, maintaining a balance between order and chaos. On one hand, my gestures indicate a docile figure, tucked in on itself or weaving and tying into another, and on the other, an independent body moving away from its former entanglements. 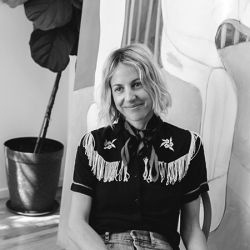