I was born and raised in Ringle, Wisconsin, a small town of roughly 1400 people. My early life was filled with extensive forest explorations, drawing and anything that dealt with He-Man. As a child I wanted to be one of two things when I grew up: a comic artist or a zookeeper. The zookeeper dream ended when I was attacked by a rampant deer. A few years later, on a separate occasion, I was stampeded by another. I currently live in Chicago. I am a happy person…a fantastic family, a hot girlfriend, and Japanese toys all attribute to that. I have also come to terms with my self-diagnosis of being both a megalophobe and a kenophobe, yet I still find myself enamored and fascinated with outer space. This has undoubtedly lead to my current body of work, which investigates a world where Man, fascinated by the stars, has vacated earth to live in the solitude of space. In his absence, Animal begin to fulfill their true destinies. These destinies include, but are not limited to, forming an alliance against Man (shall he ever return from space), developing inter-species relationships and rocking out to heavy metal. 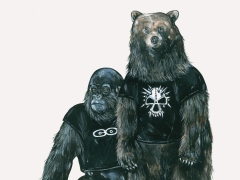 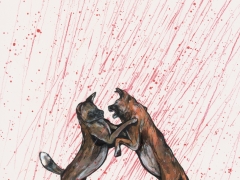 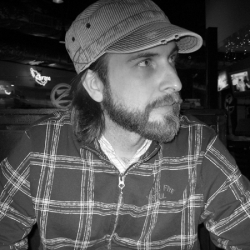