While on the top floor of a Boston skyscraper, I saw a blimp at a great distance, hovering over the harbor. It was an image I took to immediately- the blimp, as a slow and stealthy observer with a unique vantage point became a metaphor for my work as a painter. I began painting blimps quite obsessively, flying them into different landscapes. Ultimately, the blimp itself disappeared, transformed into a simple sphere. To me the spheres are a kind of universal subject matter. With their many different connotations, these forms are open in meaning and do not imply anything too specific. Some people see molecules: other people see beach balls. These circles and spheres are ripe for multiple interpretations, allowing the viewer to bring his or her associations to the experience with the painting. There also exists for me the formalist concerns of scale, uniformity of the symbol and the relationships within the images. The simplicity of the spherical image allows for an investigation of pattern, color and spatial relationships. I try to imbue the large-scale, multiple sphere works with a drama that I find in cities like Philadelphia and New York City, where large physical scale is ones natural experience. 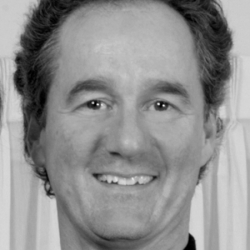