Sheila’s works are studied and imagined in real time, but distorted and edited subjectively in the nature of memory. Her work acts as an actively lived retrospective and an attempt to understand those around her. Human figures are represented as wilderness: both familiar and inviting, but also alien and wildly inaccessible. Using expressive mark-making, garish color, and dissociative pattern, Sheila creates a skewed story of intimacy. This work exists as a unique marriage between a commercial design background and a focused artistic vision, which results in a body of work that reimagines traditional pop art through the generational lens of overwhelmed and disjointed interactions. This humanist appeal to the universal “you” builds a coming-of-age narrative with a relatable goal: to find honest connection with other humans in the most humanly flawed way—dishonestly and skewed and drenched in contemporary culture. 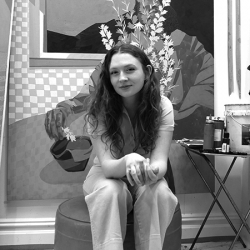