The brief history of The United States of America so far is bookended by revolution: political and technological. The American Revolution Revolution series explores 18th-century American painting and portraiture in the context of 21st-century lexicons—facebook status updates, tweets, texting acronyms—that permeate today’s popular culture. The process is a meticulous replication of portraits from the American Revolution era and then the superimposition of text-messaging acronyms in large white letters. The result is a deeply unusual mix of pop-cultural humor and post-modern theory that begs you to ask big questions: Have we reached the Baudrillardian point where hyperreality has supplanted nature? To what extent do text-messages and Facebook posts further destabilize meaning and language? And underneath it all lies a distinct sense of humor and a juvenile assertion that we shouldn’t take any of it, especially ourselves, too seriously. If George could comment today, would he click the ‘like’ button, or post ‘wtf?’ and then go check his Lady Gaga tweet? 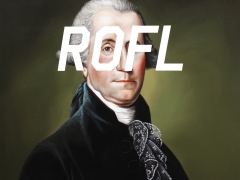 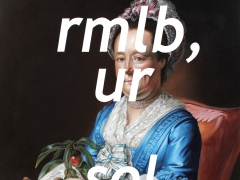 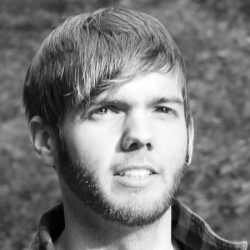