My paintings try to imagine the underlying circumstances of an image’s origin. In many of them, cinematography serves as a visual metaphor for the machinery of image production and its relation to lived experience. The production of photographs and films that commenced in the nineteenth century and later morphed into video and digital image production has in recent years increased exponentially. Individuals have become curators of a neverending online exhibition of images and videos that emerge and disappear at breakneck speed. In the face of technological shifts, the slow, analog, and relatively clunky language of handmade paintings becomes a way to both resist and revel in nonstop image production (the painting studio is also, after all, a kind of machine that generates images). The imagery within the work is drawn from a wide variety of cinematic, historical, and autobiographical sources. The juxtaposition of incongruous visual elements speaks to the nonlinear, associative way that we recall events and narratives as well as to the ways in which autobiography, cultural memory, and invention can become inextricably intermingled over time. 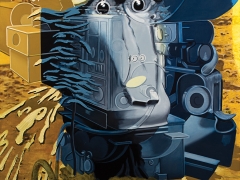 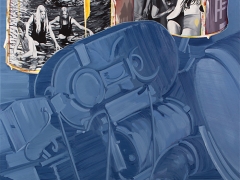 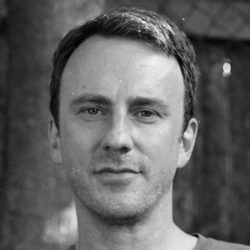