My recent works splice and reorganize histories of painting, presenting them as source material for pictures that probe time, painted historical narrative, and the museum’s changing role within contemporary society. I use digital mark-making strategies as preparation for my paintings, duplicating, truncating, enlarging, obscuring, and repositioning the essential trappings of preindustrial European painting to the point of near-abstraction. I initially learned to paint by candidly and faithfully copying Old Masters. Eventually, I came to seek the same inventiveness that distinguished those painters from their contemporaries. Typically employed as court painters, these artists were praised for their acute ability to render royalty, nobility, religious iconography, and the accompanying accoutrements thereof. Now, though, museum audiences seek out paintings by these painters, as opposed to those of their subjects. This distinction proves crucial, as I pull apart the act of painting from the sliding facts of subject matter and portraiture, focusing instead on the innate qualities of the paint and its underlying intentionality. Thus, rather than appropriate known images, my paintings—much like the museum itself—change their meaning. 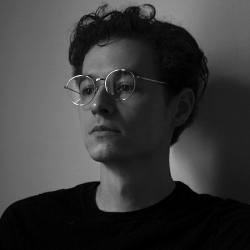