After the 2016 presidential election, I sat outside my studio staring at the night sky, feeling my hope thwarted by outside forces— malign stars. I listened to the audiobook version of Cormac McCarthy’s Children of God and considered how technology simultaneously extends and amputates senses, fragmenting experiences. I thought about ’70s abstraction, Dorothea Rockburne and Robert Ryman, and about making analog versions of digitally inspired paintings. Out of time and dislocated from the original space, my latest series of paintings explore the barriers that create more imagined than real distance between two points of view. From the perspective of being inside a cave, the viewer looks up or out to starry skies, unable to touch what the stars may bring. Scenes of hope and want, but also powerlessness, depicted in flat color and faux digital paint marks. Alien and grand in its bareness, the result balances restraint with excess, or at least tempers anxious over-embellishment with order. 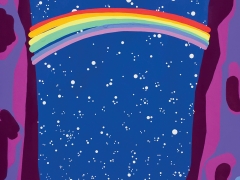 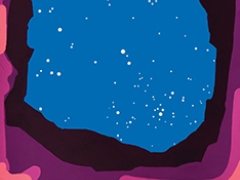 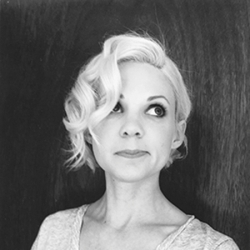