Recently I have been painting bodies and hands. And these questions keep coming up: How does a painting function as a surrogate for a body? Can a painting reach a level of intimacy and touch, as bodies can? And can imagery that toggles between states of visibility speak to those who are themselves caught between two worlds?

Resonating with recurring forms and gestures, each of my paintings develops along its own trajectory. In some, tracings and hints of a figure move through space, its gestures repeating from one painting to another. In other paintings, recurring variations of an open palm become surrogates for the body. Paint is brushed on, scraped off, scumbled, and stained, forming an image that leaves evidence of recorded time, lost moments, and new discoveries.

Along the way, I am interested in the double-edged nature of repetition and its simultaneous ability to strengthen and diffuse meaning. 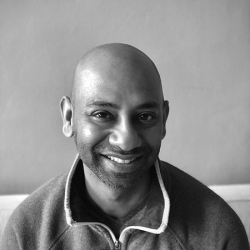