Considering the multiple definitions of the term “media,” I create mixed-media paintings using both the type that carries pigment and the varieties that carry information. I repurpose the latter as alternative mark-making tools, their intrinsic formats and contents working in conjunction with paint to determine the formal attributes of the resulting abstract paintings. In the VHS series, the encoded video/films on the magnetic tape remain undeciphered in the process of transfer to canvas, but serve as a drawing/painting material: the transformation of one medium into another and the revitalization of an obsolete technology. In their reductive and repeating compositions, the VHS paintings allude to the stark formal qualities of minimalism, yet carry encrypted narrative content. The parenthetical titles refer to the actual films that are used for each work. 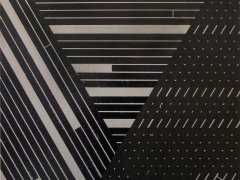 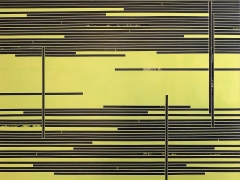 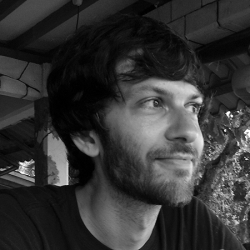