My paintings are hybrids distilling life experience and observation with visual culture. Two strands unite most of my work: animal imagery and the influence of medieval bestiaries. To make order and sense of the natural world, medieval scholars compiled bestiaries that intertwined folk tales and legends with fantasy, classical writings, and direct behavioral observation. The result was an artful, imaginative distillation. Those texts prompted me to reconsider the need to make contemporary art rooted solely in the here and now. In my work, West African monkeys, European deer, and Japanese dogs are set against stucco grounds painted with Rococo cartouches, iridescent damask, and ogee patterns from the 1960s. Like a principle of physics, one mass displaces another in space, one motif dislocates another in the paintings. Errant circles that could have escaped from an early modern painting slide across the surface, organizing themselves into tidy rows, then meander off the picture plane. Layer on layer, the result is cross-cultural dislocation, a metaphor for traditional painting in our digital world. 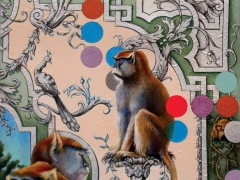 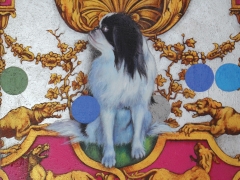 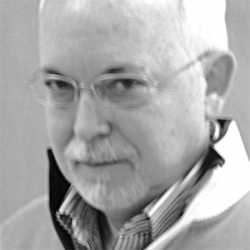