My work is foremost about my exploration of color. My love of color began at an early age, due in part to growing up in an area I considered mostly colorless. The landscape was flat, mostly desert void of flora. My early studies in drawing, painting, music theory, and piano started a lifelong exploration of both music and art. The Romantic era, one of my favorite periods in music, includes composers like Chopin, Beethoven, Bruckner, and Wagner, who used a chromatic scale that was more tonally colorful than it had been. It might even be said that in this period tonality expanded beyond the primary, secondary, and tertiary worlds. This period’s music informs the hues and values I use in my paintings, and offers endless compositional possibilities. Some of my recent paintings are somewhat conceptual, partly on account of rules set for each painting. For example, Untitled 2.013 has four parts, each consisting of the same sequence of 63 lines in 59 colors. The painting is considered a whole, similar to a symphony, which usually contains four movements. The rules aren’t important, though; for me, it’s purely about the color. 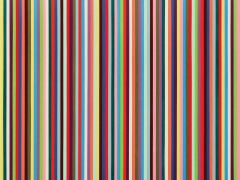 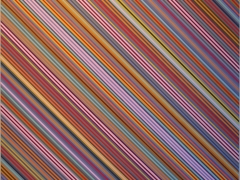 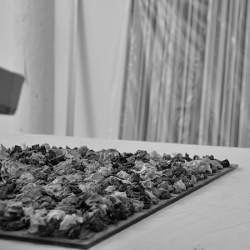