My paintings are created from photographs I take of interiors of public spaces; hotel and apartment lobbies, period rooms in museums; spaces contrived to look habitable but resolutely lacking human presence. In these photographs, I intentionally distort the actual physical reality by using very slow (disjunctive) film in available and largely artificial light with a hand-held camera, editing while photographing, composing intersections of light and forms from sections of these spaces. There is a shallow depth of field and a great shift in focus across a narrow plane, which further distorts the actual environment. I then manipulate these images in Photoshop to enhance the color and light, to further disembody the images from their original environments. Because I paint these environments in such a highly representational manner, in great detail, and yet they are unidentifiable, the paintings often verge on abstraction. They contain both the specificity of detail and the void of the spaces. They are sparingly composed and appear to depict space and yet are non-specific (although they are rendered faithfully from the actual photographs). The images play on the edge between realism and illusion, between what one knows and what cannot be identified. I am also working from images taken from sets for TV and movies. I have traveled with a location scout searching for evocative interiors that could serve as the basic images for my paintings. Working with the resulting photographs, I then edit, enhance, and at times double/mirror the images in my computer before bringing the image to the panels. The final paintings are an amalgam of contradictions, blurring the line between the real and the artificial, the dark and the light, and the banal and the transcendent. Despite the seeming realism based in optical observation, the works are clearly the result of seeing through a camera lens. This is especially clear in the way the light is treated. The light refracts, blurs and creates auras in a way that the eye cannot, and which is a common conceit of photography. 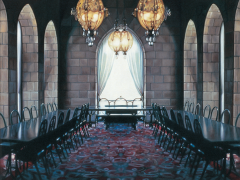 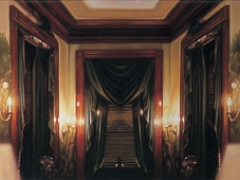 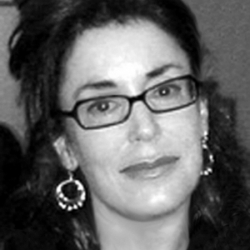