I am fascinated by self-help books, especially the ones that deal with the psychology behind why we do the things we do. I once read an article on chronic pain that explained that the trouble we have in life comes when, as adults, we continue to live viewing the world through the eyes of the vulnerable and powerless child we once were. That people see the world in the same way they did as children fascinates me. I find the 1950s suburban American imagery to visually epitomize this idea. The bright Technicolor and childlike ideals of family, community, and country, juxtaposed with the harsh realities of racism, sexism, and colonialism amazes me. Hitchcock throws these two realms together rather nicely in the movie, There’s Something About Harry. A quiet, respectable New England town uncovers a dead body and four upstanding members of the community try to dispose of it. I am interested in these visual ironies, as it can often be a catalyst to uncover one’s own subconscious stereotypes and internalized messages. 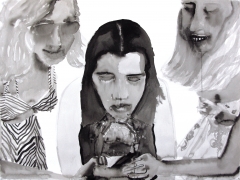 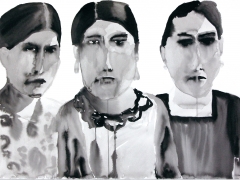 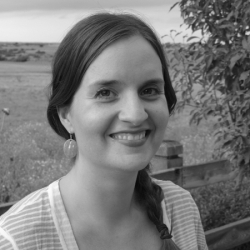