To the ancient Greeks, daemons were spirit guides and forces of nature. They existed between mortals and deities. When I was younger, I feared being possessed by the much different Christian demons and being watched by voyeuristic, spying specters in some kind of limbo, with the old curandero acting as a medium. Now I feel nepantla—“a psychological, liminal space between the way things had been and an unknown future . . . a space in-between, the locus and sign of transition”—where “realities clash, authority figures of the various groups demand contradictory commitments” (Gloria E. Anzaldúa). This is also a sign of rock-n-roll, black magic, and aesthetic mysticism. I’ve always been comfortable with being uncomfortable. I am a new-wave daemon—but I’m also possessed and seek guides and maps. I want to constantly turn them upside down and sometimes I get lost. Here—in the chasms—are various daemons/demons, journeys and struggles through dungeons, borders, and walls, representing the imposing structures, rules, and language of psychosociopolitical reality colliding with the sublime, mysterious terror of nature. 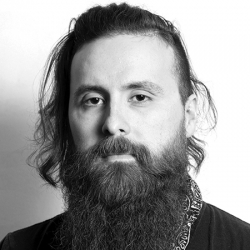