I’m interested in the distorted connections between the many systems we inhabit—political, economic, cultural, and social— and the principles, values, and beliefs conveyed by these systems. My artworks, primarily paintings but also architectural installations and time-based projects, translate these theoretical, philosophical problems into the visual or the physical. Most of my paintings could be described as idea-based. They often begin as scribbles that slowly transform, through many studies, into a mix of geometric abstractions and text elements, diagrams and color fields. I attempt to blend the analytical with the poetic by combining symbolic and indexical content such as architectural plans, color coding, text, arrows, and legends, which refer to specific concepts and issues outside the canvas while retaining an internal meaning related to color and shape. How does the subtle aggressivity of a warm orange glaze over a cold pink relate to the shift of meaning between two words such as “integration” and “assimilation”? I believe that visual experiences can lead to a form of critical engagement that goes beyond strict rationality. 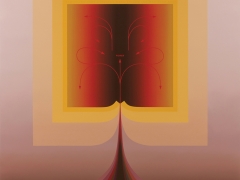 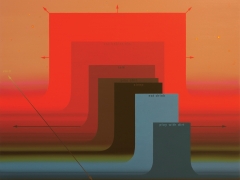 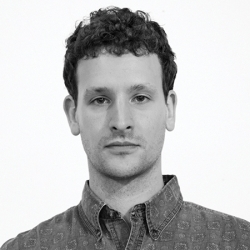