Queer Mountain is an uninhabited high-desert wilderness near Death Valley, and it is difficult to see. I tried, unsuccessfully, a few summers ago, after finding it on a map while planning a road trip somewhere else. I made it to the outskirts, but an intense fire season followed by a wet winter had washed out the roads in, and I was forced to head back the same way I came without seeing any of it. It wasn’t until much later that I started to think of this failed trip—my inability to reach this place—as an analog for a kind of fantasy tethered to landscape. Maplike reliefs, site overview collages, and fictional artifacts—forms first encountered during the six years I worked in the archaeological field—draw out and articulate this fantasy. The desert is a place defined by what it lacks; in the no-man’s-land between autobiography and fictional archaeological inventory, I’ve found a place to mine both what’s present and visible in that landscape and, maybe more importantly, what isn’t. 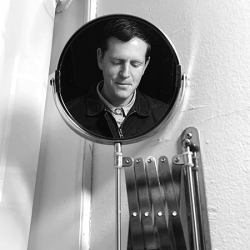