"In the old, old days, before Columbus discovered us, as they say, we were even closer to the animals than we are now. Animals could change themselves into people, and people into animals. It was a time when the earth was not yet finished. In these far-gone days there lived a rabbit--a very lively, playful, good-hearted rabbit. One day this rabbit was walking, enjoying himself, when he came across a clot of blood. How it got there, nobody knows. It looked like a blister, a little bladder full of red liquid. Well, the playful rabbit began toying with the clot of blood, kicking it around as if it were a tiny ball. Now, we believe in Takuskanskan, the mysterious power of motion. Its spirit is in anything that moves. It animates things and makes them come alive. Well, the rabbit got into this strange kind of moving power without even knowing it, and the motion of being kicked around, or rather the spirit of the motion--and I hope you can grasp what I mean by that--began to work on that little blob of blood so that it took shape, forming a little gut. The rabbit kicked it some more, and the blob began to grow tiny hands and arms. The rabbit kept nudging it, and suddenly it had eyes and a beating heart. In this way the rabbit, with the help of the mysterious moving power, formed a human being, a little boy. The rabbit called him We-Ota-Wichasha, Much-Blood Boy, but he is better known as Rabbit Boy." (Story told in White River Sioux Tribe). The idea that nothing is contained within its physical boundary, but has the potential to transform and remain in flux with its environment, is what the story of Rabbit Boy conveys. The possibility to still remain in awe of the creational powers of nature, to feel humbled by these forces in the midst of a technological world, is an idea I wish to recover in my work. A tree can have eyes, a girl can be a mountain, a buffalo can move like the sea. The possibility for interrelationships and connection can only shed more light on how we understand ourselves in regards to the world around us. Natasha Bowdoin was born and raised in the woods of West Kennebunk, Maine. She now lives and works in New Jersey. 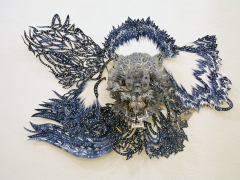 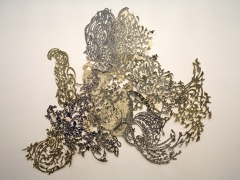