In her poem “The Language of the Brag,” Sharon Olds lays down her brag of her fullest self “pushing the new person out.” One person making another. That’s what we do, pregnant or not. Olds claims her brag for this heroic, but mostly invisible, act that women perform. I began looking for other brag moments that may be overlooked, and I found them in the selfies of the people who inspired my painting series The New Brag. Like Olds, I am reclaiming the word “brag” and its definition of being “full of oneself” as a positive and necessary stance for myself and all marginalized people in a deeply misogynist, racist, homophobic, xenophobic, and patriarchal world. Painting myself and the other subjects in The New Brag series is a way of being with each one of us for that time as a particular kind of witness. And once the paintings are completed, the images gather as a kind of community of witnesses. In this work, I am exploring visibility and co-constitution as redemptive, political acts. 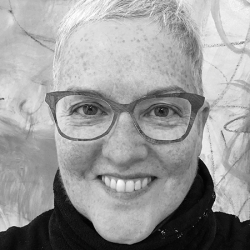