Painting en plein air and roaming parts of Chicago that tourists don't see, this urban landscape painter is inexplicably drawn to alleys, industrial sites, recycle centers, and the constant regeneration of "The City That Works." There is a never-ending energy in the scenes of smashed cars being lifted by giant "grapples" and loaded onto a conveyor belt to be recycled. A critic wrote of "her fauvist use of color" and one can see that in these paintings of twisted steel and detritus. Another series of her work consisted of images of old industrial buildings that were being torn down to make way for new construction, with the bricks being salvaged to be reused in homes and other buildings. The theme of regeneration has been present in her work for the past 18 years, which was apparent in her first solo show in 1990. Working on boards with palette knives allows aggressive mark-making, which has become a hallmark of her approach, producing juicy paintings with lots of texture. Robert Kameczura, arts writer and critic for Big Shoulders Magazine, wrote "Albrecht's Chicago paintings, with their strong geometry, bold paint surfaces, lyric details, and optimistic strength, seem very much in line with Carl Sandburg's mythical image of Chicago as "...cunning as a savage, pitted against the wilderness, bareheaded, shoveling, wrecking, planning, building, breaking, rebuilding." " 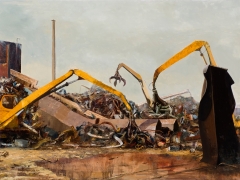 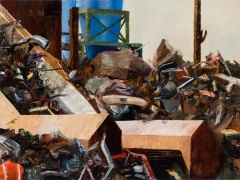 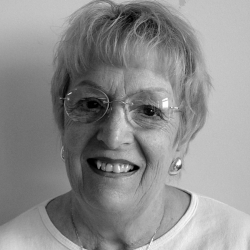