He stood at the threshold of the room. Windows, on each side, beckoned him to enter. The sunlight filled each segment of the multi-paned window to his right, vibrant and viscous, like a basket of fresh peaches. He watched as the seraphic light surmounted the great hall, illuminating the detritus on the floor, warming the mottled ceiling, and chasing the shadows into the rafters and their respective corners. Behind cooing pigeons, their feathers ruffled by his unexpected entrance. How patiently the shadows would wait for the penumbra to return. An Adagio or perhaps a piece by Satie, he thought, would augment the snowfall outside. The wind responded to his thoughts with a caterwaul: the hollow moan of a machine, and the creak of a fomented floorboard. Sheets of plastic, caught off guard, crackled and flapped on random windows like a distressed carnival tent. The lambent nature of the translucent plastic teased his eyes with an amalgam of yellows, oranges, violets and blues. In this symphony of sound and color, he surveyed what stood at antipodes with him: a woman. Silhouetted by the sun, all he could see were what appeared to be red mittens on her hands, dusted in snow, like sugar on a strawberry. And like the snow all sense of doubt, as to who she was, melted from his mind. He shivered. “Oh so evanescent,” she whispered. Startled by the cadence of her voice, he remembered: the Victorian barn, the taste of her lips, the creek of each step, the risk of getting caught, and the setting sun as his hands traveled up and down her back not knowing what to do or where to go. For an instant, he was lost, lost in a locus of his own invention: a young girl who never existed, a young man circumvented by endless summer nights, and a concatenation where remembrance was confused with the ideal. “I am the only woman you will ever love. The paradise lost, the fulcrum of memory,” she stated rather lugubriously. “You are…” he questioned flustered and flabbergasted: he knew who she was, the same apparition he had witnessed years ago in another factory, in another time. “Nostalgia,” she said. 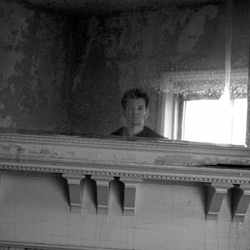