My friends and I once rented a beach house on the Oregon Coast. As a sort of sociological experiment, I brought along ski masks to see what would happen. I then proceeded to photograph my masked friends as they watched TV, smoked cigarettes, soaked in the hot tub, and held hands. Apparently the neighbors found this to be inappropriate behavior because they got us kicked out of the house indefinitely. Since then, I’ve photographed my subjects wearing masks in various public locations, such as campsites, parties, and the beach. I am interested in the inclination to read perversion and terror into such an intrinsically innocuous image as the mask. It covers little more than the wearer’s cheekbones and hair, revealing the most recognizable features of eyes and mouth. Yet somehow, masking proves a transformative, controversial act. Through highly rendered colored pencil drawings inspired by these photos, my artwork explores concepts of socioeconomic and political identity, all the while invoking a sense of humor about the things we know but choose to ignore. 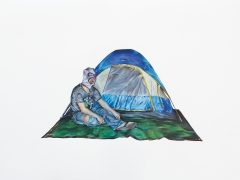 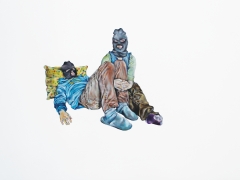 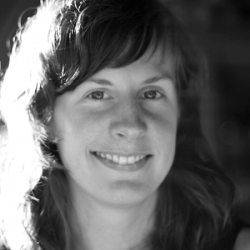