Michele Abramowitz works on both sides of an unprimed surface to distort spatial relationships in the picture plane, highlighting the indivisibility of material and image in painting. In other words, her figures exist, and can only exist, because of the permeability of the surface. Furthermore, her figures are contorted to fit the painting—defined and confined by its edges. Abramowitz does not depict worlds the viewer looks into, but rather (secularly) transubstantiates the medium’s material of paint, surface, and support into figures. By integrating the figures into the painted object, the painting becomes the body. As French art historian Georges Didi-Huberman remarks, “Figures—forms—do not simply inhabit a place: they are produced by that place.” In her current work, Abramowitz continues to deepen the unification of figure and object by further modifying the structure and surface and by bringing the reverse side of paintings into the experience of the work. 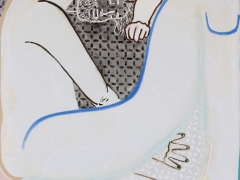 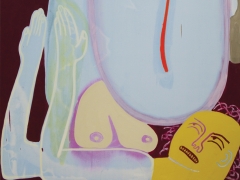 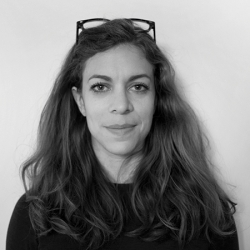