In these images, I aim to depict the complexities of intimacy in a world in which relations outside of heterosexuality are subject to suspicion and ridicule, attitudes deeply informed by broader cultural and religious forces. Repression, shame, unbridled enthusiasm, the desire to control and decorate all commingle in an attempt to represent these identities visually. Although I am interested in human interaction and dynamics, the works are often allegorical, shifting these ideas of figurative representation into a world of plants, animals, and other nonhuman beings. This depiction of the natural world calls into question the existence of a “natural” or perhaps “neutral” mode of being, specifically in the context of the heteronormative dominant culture. There is great freedom in the depiction of nonhuman beings, in that the texture, pattern, and qualities of these subjects can be invented and elaborated visually. This sense of visual freedom is of particular importance to me, as formal play—in which spatial relations collapse and shift—is central to my conception of image making. 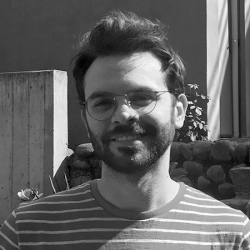