Mela M.'s new paintings show us a disorienting picture of -what appears to be - an urban space in a state of queasy dislocation. Crossing lines and extruded rectangles remind us of the intersections, plazas, towers and other features of cityscapes; yet lines that resist parallelism, angles that are not right, and perspectival vistas that are incommensurate, ground these paintings more in abstraction than representation. If they were the features of our urban life, where would they be seen from: below from a careening car, or above from a pitching airplane? Not only is the viewpoint destabilizing, but the forms themselves are in a stage of deconstruction. In several of the paintings, the visual action is mostly around the edges, with empty space near the center, as if explosive energy had thrown, or centrifugal force were pulling, these forms back into formlessness. Here and there a small area in thick relief, a shape knocked askew, or the angling of the entire surface toward the viewer, push these paintings subtly into the realm of sculpture. All, however, is not chaos and decomposition; structure, recognizability, and a unifying color and tonal and textural variation, hold these painting within our compass of experience. Another recognizable aspect of these painting is their rootedness in the artistic tradition of Mela M.'s Russia. The Suprematist paintings by Malevich and his followers, from 1915 and the years following, serve as background for these new paintings, but gone are the flatness, bright color, and revolutionary rhetoric. Tatlin's corner reliefs, with their tension and odd placement also, perhaps, contribute to the generic impurity of Mela's paintings. Ultimately, Mela M.'s paintings do not belong in the last century, with its prediction and glorification of upheaval, they belong to the beginning of our new century, for they depict things we have now seen, yet cannot avert oure eyes from. –Richard Smith, Los Angeles area writer and critic. 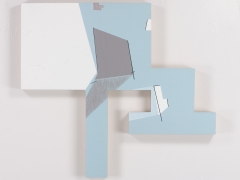 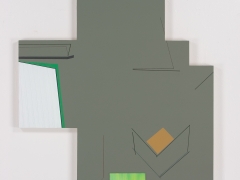 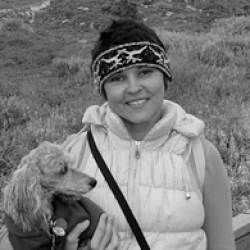