My work is an ongoing investigation of Latin America and Latin American culture. Half-Panamanian and half–North American, my identity wrestles with two cultures and two languages. As a young man, I spoke English and often dreamed in Spanish. Travels to Latin America provide the basis for my art by informing dreams and exploring subject matter that is both foreign and familiar. Subsequently, my paintings are not documentation of specific places or events, but rather landscapes of memory, exploring a line between dream and wake time, and striving for a balance between the sublime and the melancholy. Throughout my childhood, I was privy to my Latino father’s personal stories, music, and language. In addition, Latin American literature, both Magic Realism (Jorge Luis Borges) and Realism (Roberto Bolaño), have been sources of inspiration. My paintings reveal polarities such as the modern vs. ancient, the secular vs. religious, and text vs. imagery. The results of my observations are reflected by the language and imagery of my work and, in turn, broach the inseparability of crossed cultures. 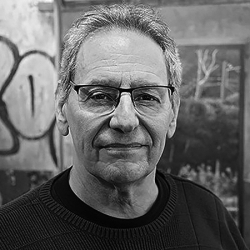