My current work is a response to the visual proliferation of military imagery in contemporary U.S. culture. Overwhelmed by media images and accounts of both the horrors of war and its myriad justifications, I became interested in investigating the often-contradictory responses of fear, apprehension, complicity, and misgiving that these circumstances can evoke. As someone who has never witnessed combat firsthand, my conception of warfare in general has been and continues to be shaped by media images, which seem to materialize out of thin air with a disturbing regularity and anonymity. These drawings are an attempt to transform this barrage of images into a more singular and contemplative experience, and one that is more evocative of the complex and entrenched system of thought that continually pits "us" against "them." Tiny soldiers, meticulously rendered in graphite, march endlessly along blank sheets of paper, emerging from and disappearing back into the emptiness of an ever-changing frontier. Anonymous troops patrol invisible and arbitrary borders; a soldier pauses, attempting to assess the location of an unknown and invisible enemy. The march continues through even the most seemingly neutral spaces, with troops and platoons, prisoners and refugees continuously shifting position. 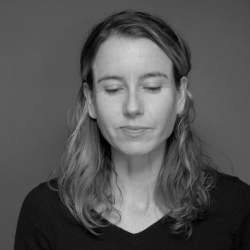