My work consists of painting from photos my brother Ryan took during his deployment to Iraq as a US Marine. Even his most benign images reveal the undercurrents of living with death. My image titled Mosul Iraq, 12.21.04, was inspired from a newspaper photo and started off this series, during the time Ryan was stationed nearby. The ephemeral light seen in the exploded tent where 18 Marines were killed, initially belies the destruction set off by a bomb. Like a Rorschach, I painted this image twice, reflecting out from itself. Thus emphasizing the ominous nature of the event and revealing a theater of violence. Ryan recently returned to the US with over two thousand photographs. In all of them light provides a pivotal source of tension; whether it is the blinding natural light seen beyond a scene of chaos, or the artificial lighting of an enclosed space. In "Iraqi Store, RRN 1" the viewer encounters the aftermath of a bombed convenience store. "Fallujah to Abu Ghraib, RRN 2 " depicts a US Marine driving a convey of Iraqi prisoners. "The Alamo, RRN 3," is a quiet sunset over the Iraqi national guard base. "Prisoner Release, RRN 4," illuminates a journey into Fallujah. And in "Prayer, RRN 5" a prisoner's rug is seen glimpsed through the opening of a solitary confinement cell in a detention center. I plan on continuing to paint from these photographs for years to come. 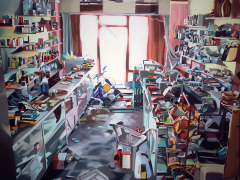 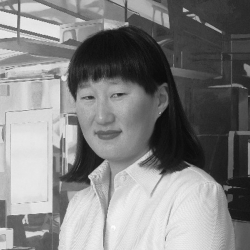