As in earlier works, the ìProject for a Revolutionî series takes as its point of departure, the moments of intrigue when the fabric of mundane existence is torn away. In back alleys, rooftops and train stations, conspiracies are made, relationships are formed and plots are hatched. Through a set of threatening or inexplicable encounters, the protagonist and his counterpart move though an urban landscape, participants in an ambiguous narrative and caught in the moments of pause between action and reaction. Using a cinematic format these pieces reference the film noir and comic books that inspire them. The enigmatic relationship between juxtaposing spatial elements and the narrative figure is explored, using the urban landscape as both setting and aesthetic component. This most current work uses a spray paint stencil technique for the figures that is rooted in graffiti, but made exceptionally more complex, incorporating up to seven unique stenciled layers to create a multi-tonal effect. These figures are combined with cut vinyl environments, both to take advantage of differing surface textures and to define and isolate the figure within its architectural surrounds. The vinyl and enamel spray paint are grounded on a field of roughed silver leaf which conceptually connects the work to its photographic roots, suggesting a deteriorated tin type or aging silver print. 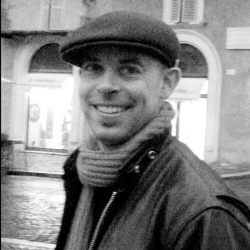