Each aspect of my paintings—color, form, content, style, historical influence—operates in an ongoing state of flux. If the logic of a work becomes predictable, I alter it. I make and partially unmake each painting over and over until the work achieves a kind of uncanny harmony. Frequently, two or more figures overlap, or a single figure assumes numerous irreconcilable positions. Structurally discontinuous and at times dematerialized environments surround and penetrate these figures. Such compositional dislocation and dissolution is not a formal exercise in abstraction. Rather, it is a conscious strategy by which I attempt to weave a sense of psychological embodiment within manifold, simultaneous potentialities. Simply put, I aim to capture a moment not only as it is, but also as it could be; not only as it appears, but also as it feels. By so doing, I celebrate, as foundational, the poetic uncertainty underlying human experience. 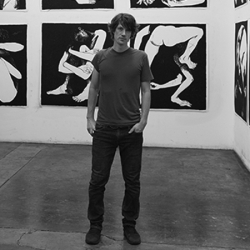