My recent body of work, entitled "1983", explores the moments in which identity is transformed into celebrity, focusing on Tom Cruise in the early nineteen-eighties. During the three year period leading up to 1984, the young actor had substantive parts in five films, launching the career of a contemporary icon. Looking back on his early work, I critically examine his image for traces of humanity, searching for any remnants of the person behind the persona. The cinematic moments I choose primarily depict Tom Cruise in states of contemplation- an actor playing the part of reluctant muse prior to his ascension into fame. Reminiscing this lost but staged youth, I can look back with the knowledge of what this character has become. I am interested in the moment before the man became an icon - before his controlled image devoured any sense of an actual identity. The title is a reference to George Orwell's prophetic novel 1984, in which he envisioned a dystopian future where the individual meets a similar fate. When our collective memory is controlled by the images we are -and are not- allowed to view, men lose the most human qualities becoming soulless automatons. 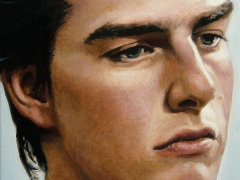 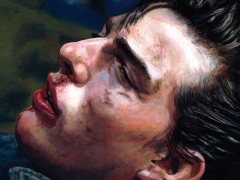