‘Mise-en-abyme,’ a term coined by Andre Gide, refers to the limitless reflection that occurs between two opposing mirrors. This installation is based on the set design from Orson Welles’s film The Lady From Shanghai (1947), featuring the aftermath of a shootout in a mirror maze. Even though the layers of representation that transform the rare publicity photograph into three-dimensional space includes oil paintings, cut-out figures, plastic mirrors, projections, and metal frames, the primary subject here is Painting, and the current state of pictorial representation. This installation explores the long history of depicting/analyzing the expansive “other space” of the mirror, or what Michel Foucault calls a ‘heterotopia.’ The fragile, and mysteriously dangerous barrier that exists between the real and the virtual is likely to shatter if we penetrate its surface. However its seduction pulls us nearer to this metaphoric intersection between perception and hallucination. In this work, the viewer is both the interpreter and the actor within the reconstructed, mirrored space, reflecting both the fear, and desire to “reside” within images, as parallel, more truthful realities. 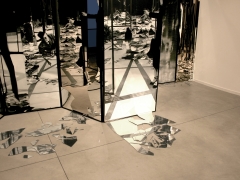 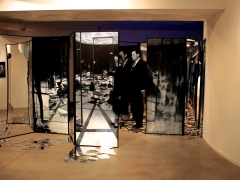 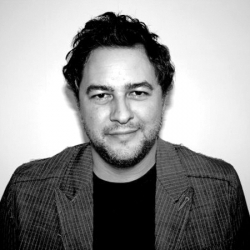