In her portraits of iconic hippies, Liz Markus's paintings reference Vietnam War era imagery without nostalgia or sentimentality. Acutely cognizant of current circumstances, she harkens back with curiosity, skepticism and empathy to an era that ultimately resulted in lost optimism and lessons unlearned. Markus is also working in homage to the masters of American abstract painting, whose works she frequently encountered while growing up near the Albright-Knox's strong collection of mid-century masters. Her buoyant washes of pigment on unprimed canvas are energized by the technique's element of chance. Often, these bright atmospheres turn dark with successive washes, alluding to the less cheerful side of the failed utopias, misguided ideals, and inherent narcissism of her subjects' era. Some of the works are so subtle and hazy as to form a perceptual illusion between portrait, landscape, and pure abstraction. Evoking Rorschach's psychological probes, these images hover between golden, fluorescent hallucination and snapshot of nuclear demise, with rock lyric-derived titles serving as foreboding warnings. She deftly maneuvers abstract expressionist, color field and pop imagery in the broad swath of her raw canvas, reacting to a period of turmoil that coincides with our own troubled conflicts. 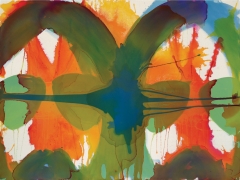 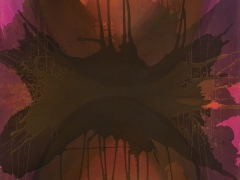 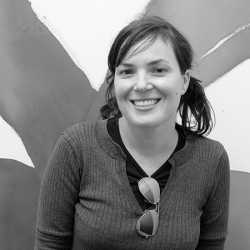