My work brings to light the paradoxical state of women’s sexuality in a distinctly patriarchal society, literally and figuratively. Laced with bright lights and a near-hallucinatory fanfare of color, the immediate tenor of my most recent work is a carousel of revelry and excitement, similar to the buzzing allure of Vegas. This sparkling veneer is sarcastically subverted by the realities that are being addressed—objectification, commodification, and the disfigurement and misuse of women’s sexuality in society. Through the hallowed reiteration of circles and a hyper-spectacle of art objects, these pieces enter the realm of devotion—devout objects to be revered, objects that pay homage to the sanctity of womanhood. This sentiment is punctuated by the material breadth of the work with complexly loaded ingredients such as neon and LED lights. By projecting my paintings from the wall, wrapping them in neon, and slathering them with puddles of resin, I defy their two-dimensionality. In doing so, I transform these paintings into art objects themselves, echoing the normative objectification of women. 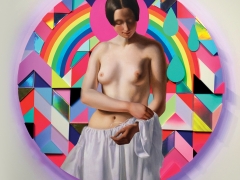 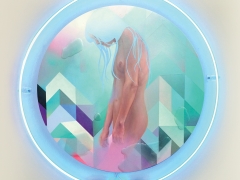 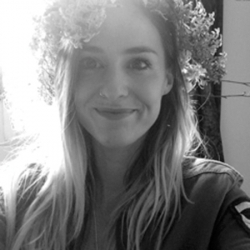